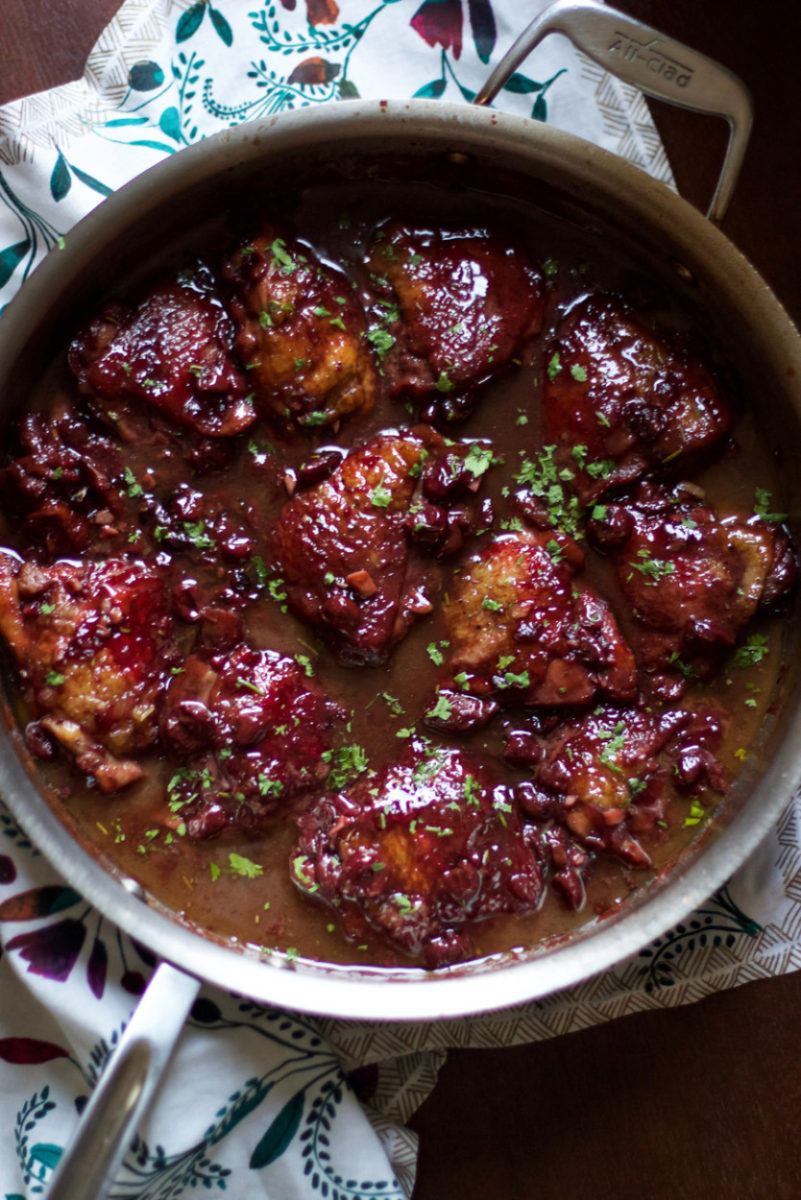 With the cooler weather we were having a couple of weeks ago, and all sorts of squashes making their way onto the stands, I thought a braised chicken dish would seem fitting since fall has arrived. I served it over cauliflower rice, with a side of roasted carrots tossed in rosemary, and a new bread recipe (good enough for sauce-dipping) that was a hit (will share soon). It was a delicious Friday night dinner for the suddenly chilly weather we were having and one I will be making again soon. And the spiced applesauce bundt cake, that I am still thinking about. Surprisingly, dinner wasn’t as heavy as I thought it would be, with an inch of room for dessert (there’s always room for dessert).

Not long after, Mother Nature had a chuckle over any best-laid plans to welcome fall with pumpkin spice baking and squash roasting mayhem around here and decided to make sunny California a sweltering California (even for this sun-loving gal), as in 98 degrees hot – and I’m not talking about the boy band.

Too hot for late-September. Has it been this hot by you too? (Sigh) If only Mother nature left some peaches and plums hanging around so that I can embrace this darn desert heat. Complaining? Who me? What would give you that idea? 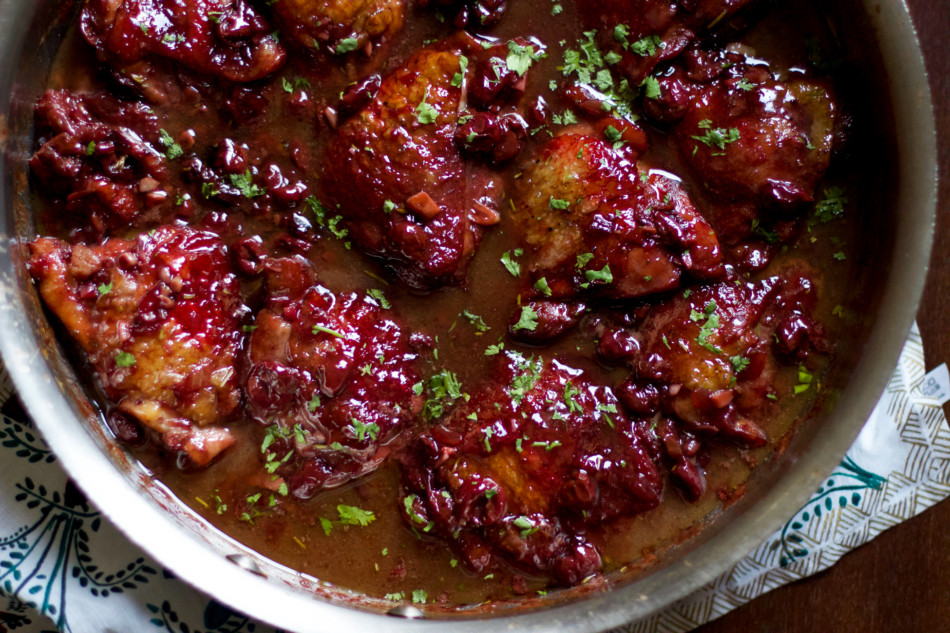 In any event, albeit this comforting braised dish may be the furthest thing from my over-heatededness (grammar police lay off) these days, it may be cool enough by you, and if so, this is one impressive make-ahead dish worthy enough to impress — seductive and deeply flavored, as a good braised dish will do — it will feed a crowd (or not, because you can easily halve the recipe for date-night bragging rights) without much fuss on your part as it does what it does while it simmers away. Now I know, when we say, braised it really means to finish cooking in the oven but mine were full (baking goodies for the weekend) so I let it simmer stove-top giving us the same splendid results and no big skillet to lug out of the oven. 🙂

I should tell you, although you likely already know this, the aroma of that fills the air during said simmer will likely lure you to dig in once done, but please do hold off a day or two, it gets even better. And good things really do come to those who wait. Scouts honor.

I realize one of the key ingredients may not be available everywhere, but if you can, scouring a Middle Eastern market for jarred sour cherries in syrup is well worth it — it adds a sharp, tangy complexity to the somewhat-sweet braised chicken that is simply delicious and is every bit what makes this dish. I was inspired to do the trek to the Valley in search of sour cherries at a large Persian market (where I also found a bunch of other Middle eastern ingredients that I hastily filled my cart with as all sorts of recipes came to mind – don’t get me started.) since craving Middle Eastern inspired foods, and since my crowd is large, hence the larger portions, I went for the larger – okay, humungous sized jar – because I didn’t want to mince flavors here.

Speaking of flavors: reason being why I also went with the double-take amount of garlic. It really (!) isn’t very vampire-worthy given its’ developing sweetness simmered on low heat and the grand amount of chicken we are dealing with. I should also tell you, if you prefer a thicker sauce, closer to a glaze, if you will, go without the slurry of tapioca starch and let it simmer another hour, to reduce the sauce even further. It will also deepen the flavor so check for seasoning later rather than sooner if desired.

We love spoonfuls of sauce over the chicken, so I add the slurry of tapioca to thicken in and shorten the reducing time, reducing the sauce by half — enough to infuse and coat while ensuring beautifully flavored falling-off-the-bone chicken with plenty of sauce to dip some bread into.

Either way, this braised chicken in sour cherries is one for the what-do-I-make-with-chicken list and doesn’t need much to make it outstanding – the simmering of these flavors will take care of that – even my kid-tested-and-family-approved can vouch for that, on a chilly night, that is. 🙂 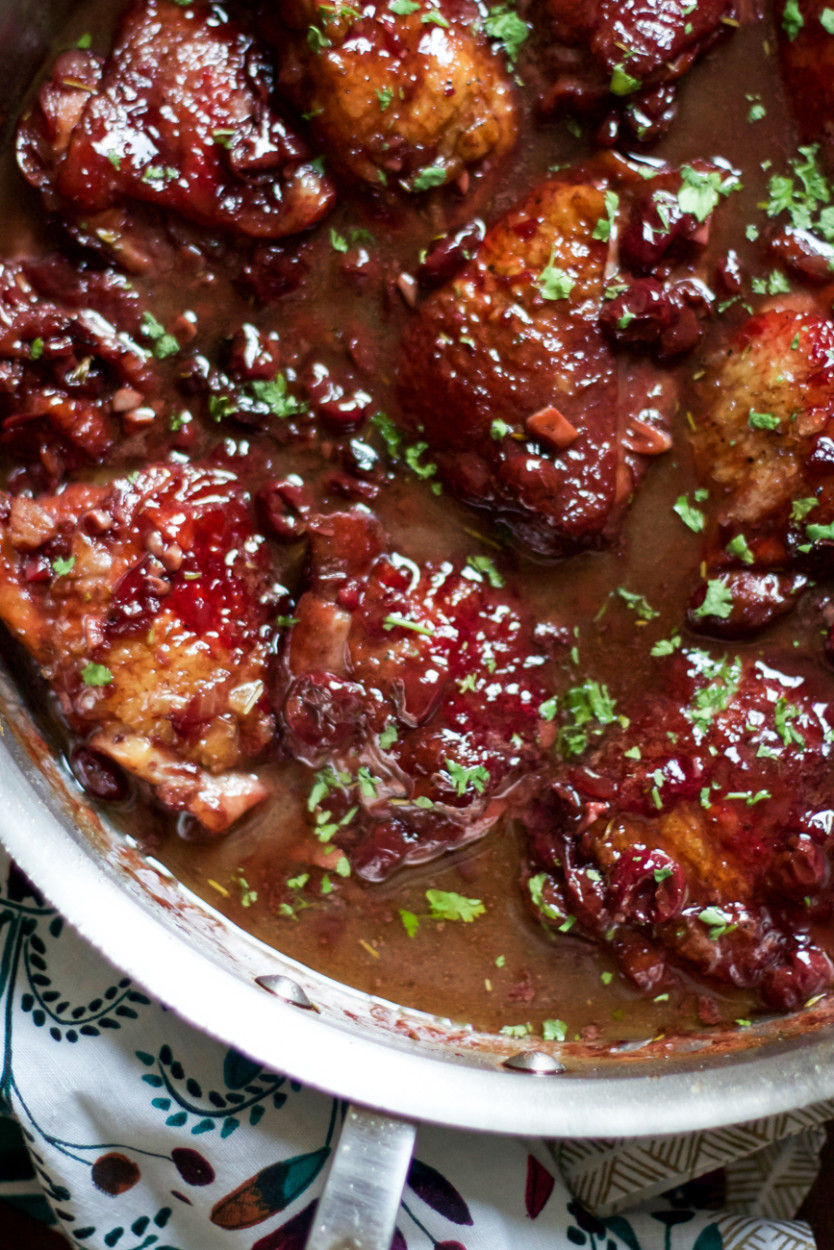 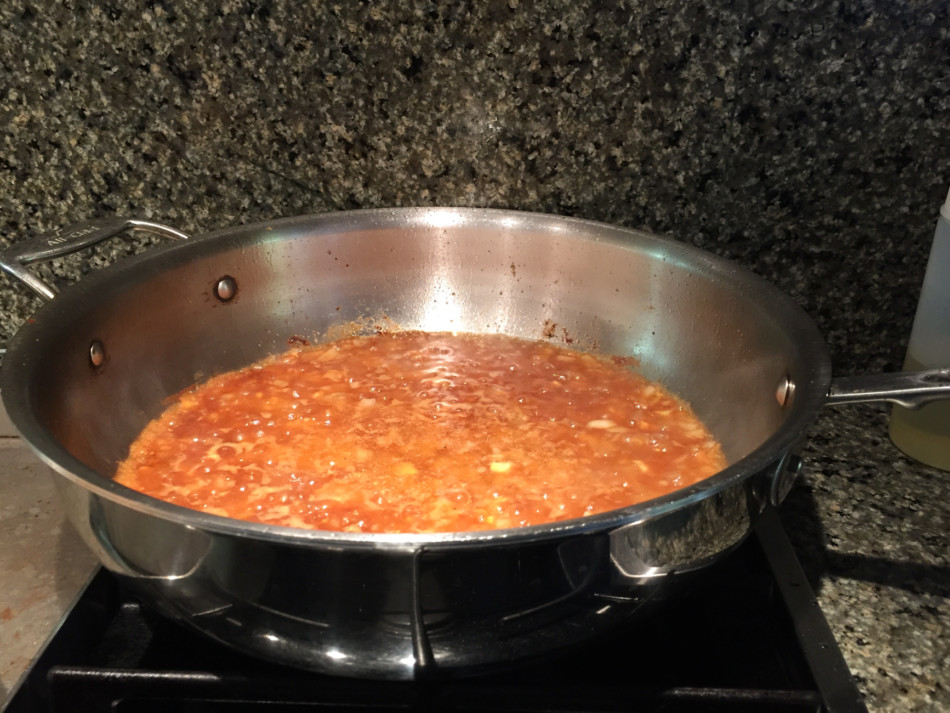 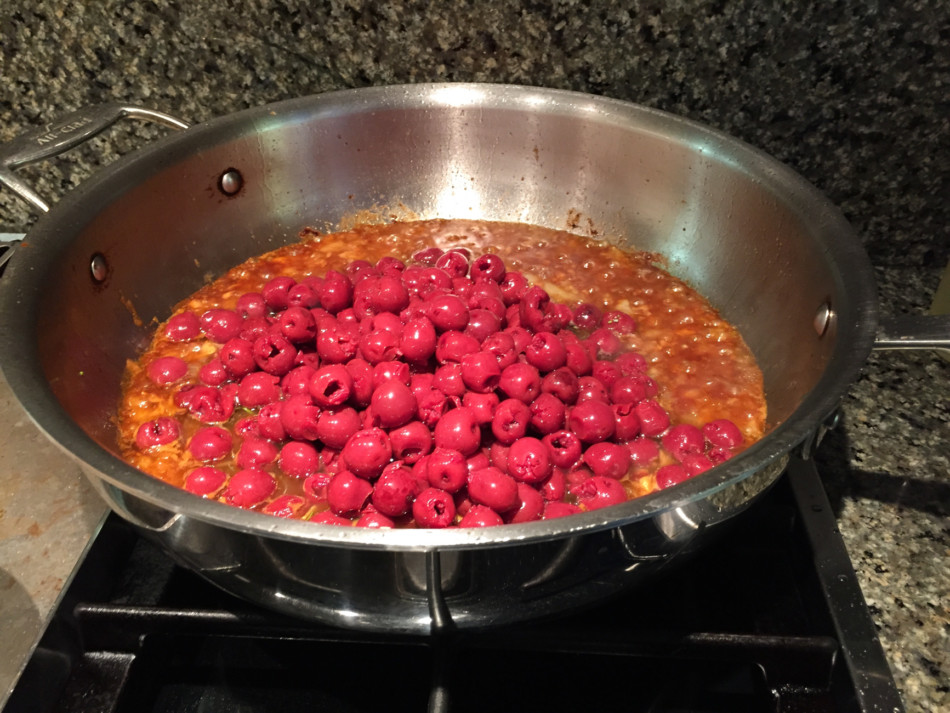 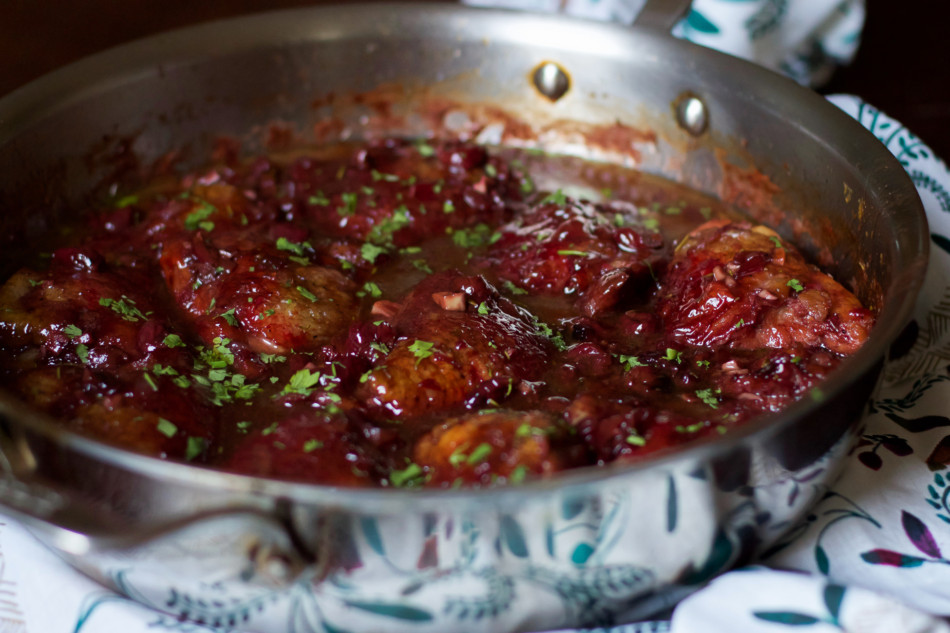 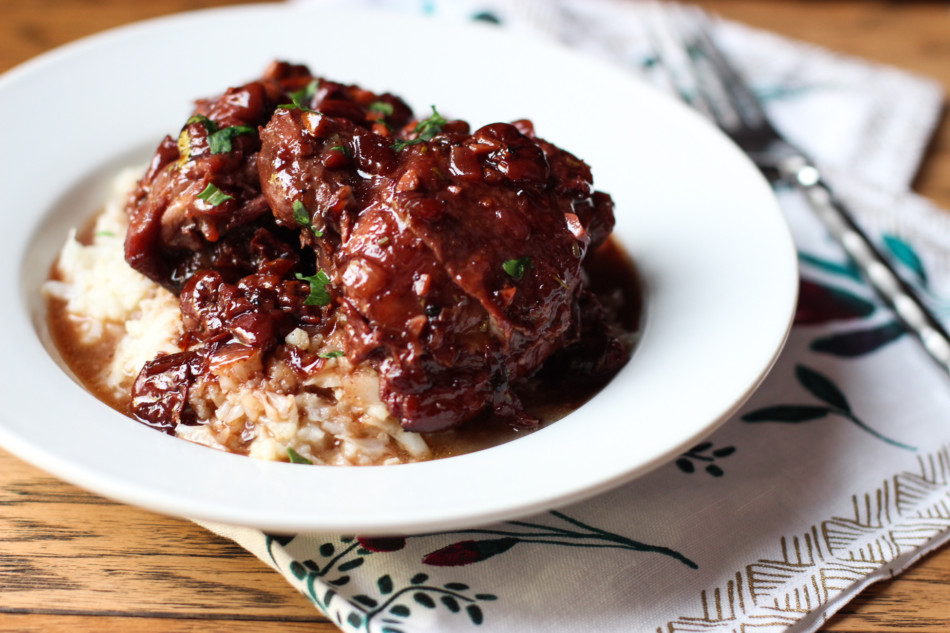 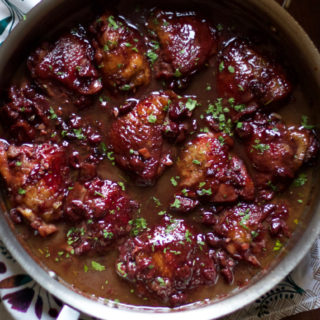 Save Print
Prep time
15 mins
Cook time
75 mins
Total time
1 hour 30 mins
A delicious braised chicken recipe with a Middle Eastern flair that is impressively flavorful, feeding a crowd without much fuss on your part, and best when eaten a day or two later so make ahead is a must (don't you love that?). And if lucky, there will be leftovers for lunch.
Jessica: From Jessica's Kitchen
Recipe type: Main
Serves: serves 6-8
Ingredients
Preparation
3.5.3208 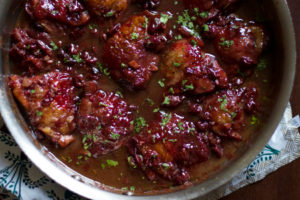